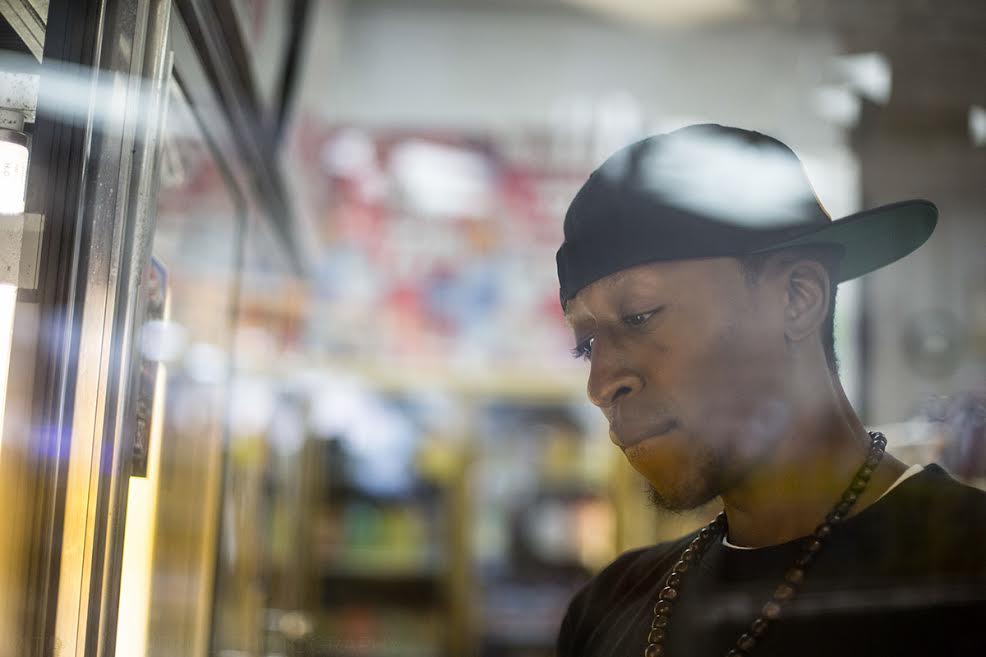 1. Who are you? / Describe what has influenced you to become who you are?
My name is MeccaGodZilla and I am an artist both audio and visual. I have been illustrating since forever and I am currently painting with sound.

Growing up in Long Island during Public Enemy, fight the power era helped spark a lot of who I am and was as an artist. dead prez and Rodan helped amplify a lot of what was already in me…the need to be fully self expressed and challenge the system (Godzilla) constantly. My parents always played a ton of vinyl on the weekends when we had to clean up the home, so I got exposed to tons of motown and disco. Lastly, I was highly influenced by American pop culture, from cartoons, comics, video games, to Godzilla/Kung-fu movies as imports with tremendously remarkable english dubbing, and 80s / 90s sitcoms.

2. How was this particular selection born? ( Its roots/ some of the featured artists on your list)
The playlist I put together is composed of music that I like and music that my brother Robin Ayumi san, put me on to. I didn’t know much about Teebs, or Samiyam (honorable mention Bonobo) but at the time a few years ago, these guys were dropping some serious heat like right under my nose. If my bro didn’t put me on I would’ve missed these gems. A lot of this list is stuff Ayumi san put me on to. The other stuff are from my own travels to Tokyo and knowledge from digging. I am a huge fan of RZA and Björk so I had to sprinkle them in there.

3. What are some of the main challenges you find today in finding beats/instrumentals? /How do you navigate through today’s climate online/vinyl etc?
I think for me, it is just quantity and volume. A lot of great artists are putting out so much great music and it literally is just a lot of music. I won’t be able to hear it all this lifetime. I kind of stick to what I know and then when I feel I need new music…I start asking the fam questions, only because I really, really like great music and respect their taste. Sometimes because of the volume it is hard to find the really great musicians with originality.

I am a fan of vinyl. I do love music you can touch and have to take time to play. There is something special about playing music in an analog way and enjoying the art, looking through booklets or at the album sleeves. BUT.. I am not opposed to digital and listen to a LOT of music via YouTube and Spotify. Streaming is amazing… if only the payouts were just a lil bit more for artists who work so hard to create these gems though…but yeah.. all mediums I subscribe to. Not opposed to any of them as long as the music is accessible for the listener and being heard. For right now…where I am.. YouTube and Spotify are holding me down.

4. How do you see the beat scene/ instrumental scene/ production scene evolving?
Wow. Great question! The West Coast is BEASTING!!!!! So proud of what they are doing out there. New York is coming along and I am grateful that Beat Haus really put their foot down to create something for all of us here. It was great seeing them collab with Soulection too. Power moves. I also admire what the Warper Party is trying to do as well. The electronic beat scene crosses over into “Hip-Hop” and many genres from what I’ve seen attending the warper parties. New York hopefully will support these movements more. The vibes are pretty remarkable!

I think the evolution of music production is great. It is mind blowing because I come from an era where many producers didn’t share there secrets or info about where they dig for records to sample. We didn’t copy styles either and you had to be lucky for an elder to put you on as to how to rock equipment. Being original was so important. Now, with YouTube University and producers really communicating globally and spreading the love, you hear a lot of styles evolving. The software game is tremendous too. You can do damn near anything with software now. I’m happy about it.

I think about culture and genre and how it plays into music. For example… I’m Haitian and Bajan American.. mixed.. so it’s like what does Kompa [konpa] or spouge / calypso sound like fused powerfully with my understanding of music production in a Hip-Hop way. Or for the fam in Tokyo or Taiwan, what does modern/contemporary music sound like when powerfully mixed with traditional elements of home. A last example is.. say if the Japanese taiko drum is used instead of the 808? It is something I have experimented with on a song called “Hayashi n Kaze(林 風)” featuring Masia One. It is using tradition to “fit in” right now.. nah mean.

5. What is the most important thing you listen for when you search for new gems?
Mmmmmmmm… originality. I can’t front. Anything that does not sound derivative is awesome to me. Even if it isn’t produced in the greatest way but I can get a sense of where a producer was going, it’s pretty great. There are a lot of derivative style producers where the beats sound exactly like XYZ’s beats who indeed sounds just like TUV’s beats and ABC’s beats. I never get “bored” with anything but stuff like that is quite “boring” to me. I am slightly turned off by that. Lol.. Far from a hater… just not the biggest “fan” of that. But when you truly can go listen to a producer and be like oh shit.. sun is NICE.. or she is amazing..for just putting the originality in there.. it is pretty inspiring to vibe to. But on the contrary, we are all influenced by someone else… we have producers we really look up to, so I do understand the Kobes that exist amongst the Michaels. I really try to find those Iversons and Steph Currys tho…they are inspired by who came before them but aren’t a Kobe copy nah mean.