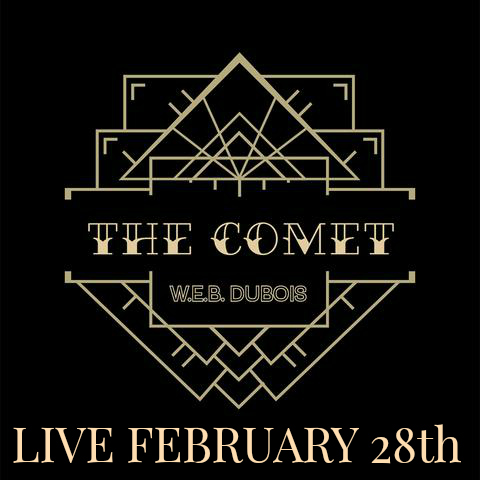 “I already had this [concept] on my mind but I didn’t know what it would become,” stated Program Director, Keisha “TK” Dutes after recapping what used her to embark on this creative endeavor that is a on-air and live reading of W.E.B. Dubois’ The Comet.
The Comet is a 1920s science fiction short story, that explores the relationship between Jim Davis and Julia after a comet hits New York and unleashes toxic gases that kill everyone except them. Mr. Dubois layers his science fiction story by addressing the racial economic divide as Jim Davis is revealed to be a poor black man and Julia is revealed as a wealthy white women. This compelling story along with satisfying the need to have a diverse cast tell the story drove Dutes to use a predominantly non-white cast.
Reader/Actors:
Narrator – Aiesha Turman
Jim Davis: Dramatic Dyalekt
Julia: Vanessa Tanicien
President/Father: Tumani Everett
Fred: Drew McConnell
Black Woman/ Bank Teller: Emma Bracy
Directed and sound designed by: Keisha TastyKeish Dutes
Live engineer: Walker Conscious
“I just loved audio stories and dramas but I was sad I couldn’t hear my own voice. That little accent, you know something that allows for you to identify with something right off the top.”
The celebration was more than the live reading as Playwright Lacresha Denise Berry opened up festivities with a performance segment of her play, “Air Tubman.”
Listen to the full broadcast recorded live at The Listening Booth here: